The 15 Best The Girl With Seven Names Quotes

In this article we’ll talk about some of the best quotes of  The Girl With Seven Names quotes by Hyeonseo Lee. These quotes will gives us a glimpse about the most secret nation of planet earth, i.e., The Kingdom of the Kim dynasty, North Korea.

The Girl With Seven Names quotes by Hyeonseo Lee

1. I’m telling them about the girl who grew up believing her nation to be the greatest on earth, and who witnessed her public execution at the age of seven.

3. In North Korea, bribery is often the only way of making anything happen, or of circumventing a harsh law, or a piece of nonsense ideology. 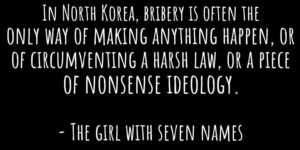 4. Kind people who put others before themselves would be the first to die. It was the ruthless and the selfish who would survive. 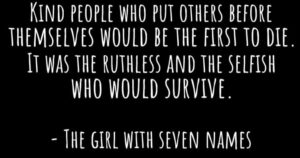 5. North Korea is an atheist state. Anyone caught in possession of a Bible faces execution or a life in the gulag. Kim worship is the only permitted outlet for spiritual fervour. 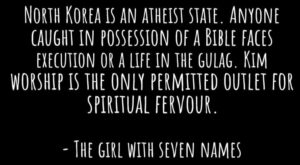 6. Starvation can drive people to insanity. 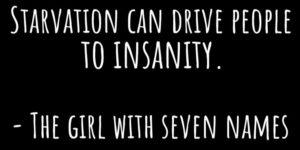 7. We were all Koreans, sharing the same language and culture, yet we were technically at war. 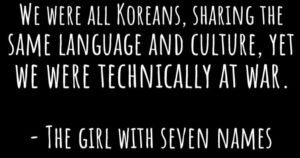 8. In North Korea the only laws that truly matter, and for which extreme penalties are imposed if they are broken, touch on loyalty to the Kim dynasty. 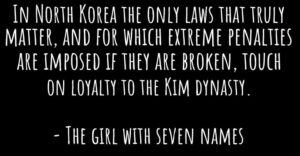 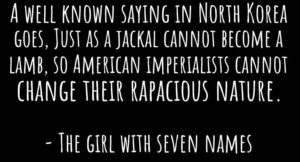 10. Some convictions would not change overnight.

11. If the North Korean people acquired an awareness of their rights, of individual freedoms and democracy, the game would be up for the regime in Pyongyang. 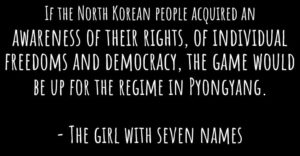 12. I had grown up in a communist state where the Fatherly leader provided for all. 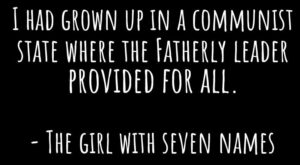 13. One of the main reasons that distinctions between oppressor and victim are blurred in North Korea is that no one there has any concept of rights. 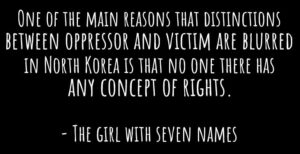 14. Dictatorships may seem strong and unified, but they are always weaker than they appear. They are governed by the whim of one man, who can’t draw upon a wealth of discussion and debate, as democracies can, because he rules through terror and the only truth permitted is his own.

15. The people would realise that in North Korea full human rights are exercised and enjoyed by one person only, the ruling Kim. He is the only figure in North Korea who exercises freedom of thought, freedom of speech, freedom of movement, his rights not to be tortured, imprisoned, or executed without trial, and his right to proper healthcare and food. 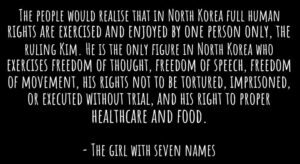 I hope you like these quotes of the girl with seven names, Thanks for reading, Jai Hind.