The madness of  India’s Partition, was unbelievable. In fact, the way people killed each other in the name of religion tells us the importance of social and religious harmony. And in this article we’ll talk about some of the best quotes of Khushwant Singh’s all time best novel, Train To Pakistan.

1. You have seen the world and read many books, but take it from me that a snake can cast its slough but not its poison. This saying is worth a hundred thousand rupees. 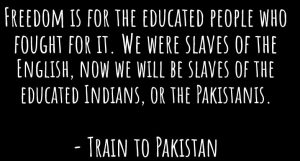 3. In a state of chaos self-preservation is the supreme duty.

4. In a country which had accepted caste distinctions for many centuries, inequality had become an inborn mental concept. If caste was abolished by legislation, it came up in other forms of class distinction. 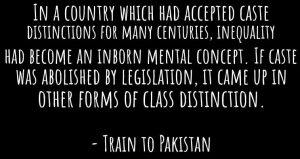 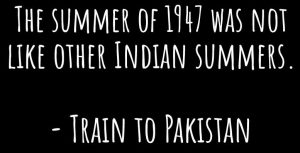 6. It was not possible to keep Indians off the subject of sex for long. It obsessed their minds. It came out in their art, literature and religion. 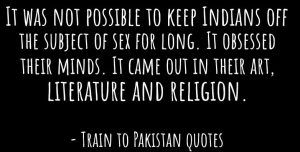 7. The monsoon is not like ordinary rain which comes and goes. Once it is on, it stays for two months or more. Its advent is greeted with joy. Parties set out for picnics and litter the countryside with the skins and stones of mangoes. Women and children make swings on branches of trees and spend the day in sport and song. Peacocks spread their tails and strut about with their mates; the woods echo with their shrill cries.

8. You talk rashly like a child. It will get you into trouble one day. Your principle should be to see everything and say nothing. The world changes so rapidly that if you want to get on you cannot afford to align yourself with any person or point of view. Even if you feel strongly about something, learn to keep silent.

9. O letter, let my lover learn
How the fires of separation burn.

10. There is no crime in anyone’s blood any more than there is goodness in the blood of the others.

11. No bhaiji, Criminals are not born. They are made by hunger, want and injustice. 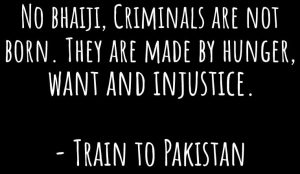 12. Yes, the Englishmen have gone but the rich Indians have taken their place. What have you or your fellow villagers got out of independence? More bread or more clothes? You are in the same handcuffs and fetters which the English put on you. We have to get together and rise. We have nothing to lose but these chains. 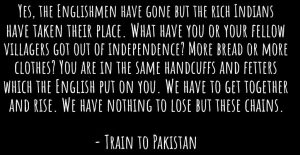 13. I am not a villager. I come from Delhi. I was sent to organize peasants, but the government does not like the people to be organized. 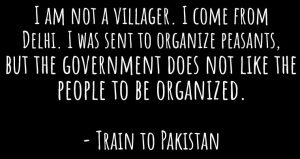 14. The bullet is neutral. It hits the good and the bad, the important and the insignificant, without distinction.

15. The police are the kings of the country. They will let me off when they feel like it. If they want to keep me in, they will trump up a case of keeping a spear without a license or going out of the village without permission, or just anything.

16. The young man was relieved that the other had not gone on with his first question. He did not have to say what Iqbal he was. He could be a Muslim, Iqbal Mohammed. He could be a Hindu, Iqbal Chand, or a Sikh, Iqbal Singh. It was one of the few names common to the three communities. 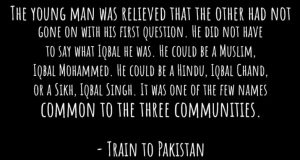 I hope you like these train to Pakistan quotes, Thanks for reading, Jai Hind.