The Chittagong Uprising : The Forgotten Valour Of The Indian Revolutionaries

Do and Die, The Chittagong Uprising 1930-34, is a thoroughly researched book about the most audacious attack on the British Raj by the brave revolutionaries of India. 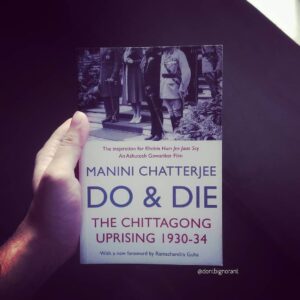 So, how many of you have heard the name of Surya Sen, Ananta Singh, Ganesh Ghosh, Kalpana Dutta and Pritilata Waddedar.

If you know about these brave men and women then it’s really good. If not then we’ll discuss about them and their supreme love for their motherland.

When it comes to India, Majority of the people are aware about Mahatma Gandhi and his creed of non-violence. In fact, we were taught since our childhood that because of ahimsa (Or non-violence) India has gained her freedom.

Although, that’s not the complete truth. There were many brave sons and daughters of mother India who had sacrificed their lives for this country and they believed in the cult of violence. Like  Bhagat Singh, Chandra Shekhar Azad, Rajguru, Sukhdev and many more like them.

And also because of their revolutionaries acts that the British were forced to leave their jewel of the crown ‘India’.

Non-violence and Violence both played a pivotal role during the Indian independence.

The Chittagong uprising was one of the many heroic deeds committeed by those revolutionaries who were forgotten by the people of Hindustan.

What was Chittagong Uprising?

On the night of 18 April 1930, some sixty-four brave souls under the leadership of Masterda Surya Sen attacked the T.O. (Telegraph Office), V.B. (Volunteer Barracks i.e The AFI armoury), P.B (Police barracks) and the C.H (Club house, or The European club building) in the remote district of Bengal, Chittagong and proclaimed the formation of a ‘Provisional Revolutionary Government’.

The Chittagong armoury raid was the first direct attack on the British Raj since the first war of independence in 1857, or the sepoy mutiny.

Could you imagine a small band of young men attacked so ferociously the mighty British Raj.

Although, these brave Revolutionaries couldn’t fulfilled their aim and some of them martyred while fighting the British armed forces. But, the Chittagong uprising had lit the fire which engulfed the whole province of Bengal throughout the 1930s.

Who was Surya Sen?

Surya Sen aka Masterda was the leader of the Chittagong uprising 1930-34.

He was born and brought up in Chittagong (Now in Bangladesh) where he started teaching as a school teacher. In fact, he was famous by his nickname, Masterda, because he used to teach young students. 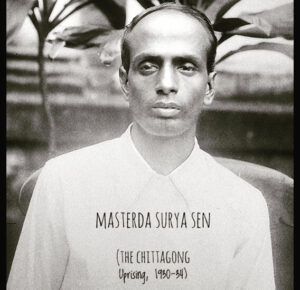 Surya Sen, The man behind the Chittagong armoury raid.

Surya Sen and the Chittagong group were inspired by the deeds of the ‘Irish Revolutionaries’, especially the The Easter Rising which they tried to emulate in Chittagong.

Although, Masterda’s comrades died while fighting and some of them later caught by the British Raj. But, he remained elusive for several years until he was caught and hanged till death.

In fact, the so-called epitome of civilization the British were so scared of him that instead of handing his dead body to his friends and family they thrown out the body in the Bay of Bengal.

Although, Masterda Surya Sen sacrificed his life to free India from the yoke of British imperialism. But, it’s really unfortunate that he and his fellow Revolutionaries were not only forgotten by the people of India but they were also systematically removed from the history of India. Ironic.

This was Masterda’s last message to his comrades –

This is the time for preparation to embrace death as a friend and this is the time to recall lights of other days as well. At such a solemn moment, what shall I leave behind for you? Only one thing – the dream of Free India. How auspicious a moment it was when I first saw it! Throughout my life, most passionately and untiringly, I pursued it like a lunatic…. Onward my comrades, onward- never fall back. The day of bondage is disappearing and the dawn of freedom is ushering in.

These words tells us that how brave these people were. They were ready to die anytime for their motherland.

In fact, people like them are the real Patriots, unlike those fake people who give certificates of nationalism because you don’t adhere to their ideology.

Who was Kalpana Dutta and Pritilata Waddedar?

Kalpana Dutta and Pritilata Waddedar were the brave revolutionaries of India who were second to none when it comes to sacrifice and bravery. Like their male counterparts they also played a significant role in the Chittagong uprising, 1930-34.

Albeit, Pritilata Waddedar martyred while leading a group of men while attacking the British. But, Kalpana Dutta saw the new dawn of India’s independence only to be forgotten like the rest of her comrades.

This is the problem with the people of India. That we are a nation of forgetters. Sons and daughters of so and so are enjoying the perks and privileges while the common people are forced to believe in the propaganda.

This is what Pritilata Waddedar said about the women revolutionaries –

Females are determined that they will no more lag behind and will stand side by side with their brothers in any activities however dangerous or difficult. I earnestly hope that my sisters will no more think themselves weaker and will get themselves ready to face all dangers and difficulties and join the revolutionary movement in their thousands.

Women like them are the real heroines of India, unlike those people who use social media to show their pseudo bravery by spitting venom either against a particular community or against an individual.

The Charkha and The Gun –

During the India’s struggle for independence not a single leader of a stature like Gandhi, Nehru, Sardar Sardar Vallabhbhai Patel, Subhash Chandra Bose, Sarojini Naidu, Maulana Abul Kalam Azad never ever said that the Indian Revolutionaries were anti-nationals.

They all respected their heroism and bravery for their motherland. They had ideological differences with them but they all believed in the principle of ‘Unity in Diversity’.

In fact, during the Non-cooperation and Khilafat movement of 1920-21, Revolutionaries like Surya Sen and people like him participated in the movement. And supported it through thick and thin.

It was only when Gandhiji abruptly called off the Non-cooperation movement in February 1922 because of the violence at Chauri-chaura that the Revolutionaries like Surya Sen became disillusioned with the Mahatma’s creed of non-violence and decided to teach the British Raj the lesson in the language which they understood better.

If Gandhi’s Charka symbolise the creed of non-violence then the Gun of our brave revolutionaries epitomizes the courage of multitude who had laid down their lives for the freedom of India.

During the ‘Quit India’ movement of 1942, Mahatma Gandhi gave the slogan, Do or Die. And the Revolutionaries of India belived in the deed of Do and Die. This is the basic difference between the ideology of Gandhiji and the Indian Revolutionaries.

Gandhiji said this about the Revolutionaries of India –

We have in our midst, I know, a school of violence also. I have endeavoured, as several others of my co-workers have endeavoured, to win them from what we hold is an error; but, at the same time, I know that there is a common cause, even between them and ourselves. They are burning to attain the freedom to which India is entitled, which is India’s birthright.

If you’ve read carefully what the father of the nation said about our brave revolutionaries then you should have realised the importance of unity.

Because, United We Stand, Divided We Fall.

I’ll conclude with these words of the author –

‘No single leader or movement or ideology can take sole credit for gaining India her freedom’.