The First Sikh Guru, Guru Nanak by Harish Dhillon is a readable and a concisely written biography of the founder of Sikhism.

The main USP of this book is that within few hundred pages the author has unravelled the life and times of the First Sikh Guru.

Religion plays a very important role in the life of an Individual. You can’t escape from it. Even if you are an atheist. Especially, in a country like India. 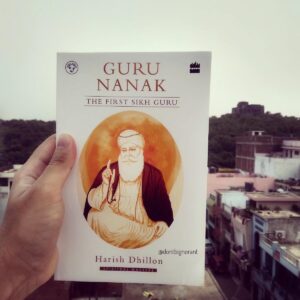 The Founder of Sikhism, Guru Nanak

Although, majority of the people are aware of the major religions of the world like, Hinduism, Judaism, Buddhism, Christianity and Islam, and the prophets associated with it.

But, there are several other religions too like Jainism, and the topic of this article is Sikhism and the man who was behind the establishment of this beautiful religion, Guru Nanak Dev Ji Maharaj.

So, some of you might be thinking who is this man and why he started this religion.

Let’s start by asking some questions related to this subject of ours.

Who Was The First Sikh Guru?

Guru Nanak was the First Sikh Guru and the founder of the Sikhism, One of the youngest religions of the world.

He established this religion of peace, humanity and tolerance around the 15th century.

His philosophy is all about serving the mankind without expecting anything in return.

He was from a well-to-do family. His father Mehta Kalo was an employee of the chieftain of the Talwandi. His mother, Tripta was a religious woman who used to look after her family.

When Nanak was born, a Pandit (Scholar) told his father that his son was destined for something great.

His father was delighted after hearing this. And started planning a bright future for his beloved son.

But, destiny had planned something else for Nanak.

From his childhood Nanak liked the company of holy men. He used to debate with them. He enjoyed spending time with them.

Most of the time he preferred to be in the woods with ascetics. And this irritates his father the most.

To divert the attention of his son, Mehta Kalo decided to made him teach several languages.

He hired several scholars who taught Nanak the languages like Sanskrit, Persian and Arabic.

Nanak was a bright student. He learnt all these subjects within a short span of time.

And again he went to the woods to accompany the holy men and quenched the thirst of his curious mind.

Because of this the relationship between the father and the son became sour for sometime.

And again to divert the attention of his son from the world of spirituality his mother and father decided something else, which became famously known as the ‘Sacha Sauda’, The True Bargain.

The Sacha Sauda and Nanak :-

One day Nanak’s father gave him few silver coins so that he can go to the nearby town of Chuharkhana and bring back some items so that he will sell the same at his town and earn some profit from it.

To make his father proud, Nanak decided he will do everything this time. So, went to the town of Chuharkhana with his friend.

While traveling through the woods Nanak saw some holy men who were naked and looked so malnourished that he thought they will die at any time.

His curious mind again led him towards those ascetics. Nanak’s friend became bewildered when he saw this. He warned him about the task that his father gave him.

But, Nanak was Nanak. He asked the holy sadhus about their religion and from which sect they belong. 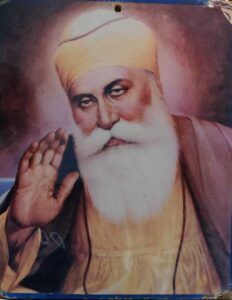 Those sadhus (holy men) were from the Nirbanis sect of Hinduism.

After asking them several questions. Nanak, took their blessings and he went to the town.

Nanak bought several food items and other important stuff from his father’s money. And instead of returning to his home he went to those Nirbanis Sadhus and gave them all what he bought.

Those holy men were unfed for the past seven days before meeting Nanak. They gave Nanak their blessings and with those good wishes Nanak felt happy and went home.

When Nanak’s father saw him coming empty handed. He realised something was wrong.

When Nanak told him about his encounter with those holy men. And what he did with his father’s money. His father became so angry that he thought his son is going to be doomed because of his spiritual nature.

His father thought how can he survive in this world which is full of evil people.

But, Nanak told his family that by feeding the unfed he already earned a profit which is uncountable.

By doing good deeds he not only earned something which is beyond the comprehension of those materialistic people who only loots but he also showed that by serving others you can serve the Almighty.

This incident is known as the Sacha Sauda, The True Bargain.

Although, since his childhood Nanak showed his inclination towards the spirituality. But, he received enlightenment at the town of Sultanpur.

Guru Nanak had an elder sister by the name of Nanaki. They both loved each other.

Nanaki married to a man by the name of Jai Ram, who was an offical of the Nawab of Sultanpur, Daulat Khan Lodhi.

So, it was decided by his sister that Nanak will come to Sultanpur and will work there.

The Nawab of Sultanpur already heard about Nanak and the incident of Sacha Sauda. So, he appointed Nanak as his storekeeper.

Nanak not only worked hard but he also made sure that accounts will remain up-to-date.

At his sojourn in Sultanpur Nanak started composing hymns and he along with his best friend, Maradana used to sing those hymns.

We will come to Maradana later on and his importance in the life of Guru Nanak.

People began to flock at Nanak’s place for hearing those melodious hymns. People realised that Nanak was a divine man.

One day Nanak went for a usual bath along the river. But, even after several hours he didn’t returned. People became anxious and thought that something bad happened to him.

A search began for him but to no avail. But, a soldier found him mediating deep in the woods. He came back and told that Nanak is fine.

The first words that Nanak had uttered after the enlightenment –

This became the foundation of his religious philosophy. And with that Nanak became Guru Nanak, The First Sikh Guru.

According to Guru Nanak there is only one caste in the world and that is Mankind.

He preached against caste, creed, ethnicity, superstition and unnecessary rituals.

He never claimed to be a God. He never said that he possessed some supernatural powers.

He served the mankind. He taught by example.

Maradana was not the only the best friend of Guru Nanak, In fact, he was more than that. A companion, a disciple and his brother in arms.

Guru Nanak was a great traveller of his time. He had travelled for almost 23-years. Along with mardana they had travelled to places like Tibet, Ceylon (Sri Lanka), Arabia, Iraq, Iran and to the length and breadth of Hindustan (India).

You can consider him a vlogger or blogger of the current time. The only difference is that he taught the masses the right way and the so-called social media influencers of our times only polishes our Ignorance.

One more thing related to Maradana is that he was a muslim from the marasis caste (Professional Singers).

You can gauge now that Guru Nanak never believed in religious discrimination.

Another important aspect about Nanak was the influence on his life of a man by the name of Sayyad Haasan.

Sayyad Haasan was the neighbour of Nanak and his family. He was a man of good books who introduced the young Nanak to the world of Islam.

All of this shows us the influence of diversity which Nanak had on him since his childhood.

Nanak and his family :-

Guru Nanak was married to a woman by the name of Sulakhni. They had two sons, Sri Chand and Lakhmi Das.

Nanak’s wife not only supported her husband but she also taken care of the entire family.

She never complained. She stood by her husband through thick and thin. What a strong woman she was.

Although, Guru Nanak had two sons but when the time came for the succession instead of choosing his sons he had selected a man by the name of Bhai Lehana who became, Guru Angad, The Second Sikh Guru.

This aspect of Guru Nanak also shows us that he preferred merit over any other thing.

In Indian subcontinent, nepotism is quite common. Be it Politics or any other field. Sons and daughters of so and so get the favours easily, while the deserving People have to struggle or wait for eternity.

By reading the life and times of Guru Nanak we can also learn that hereditary transition should not be accepted by the society as long as he or she deserves to be there.

After gaining the enlightenment and When he was done with his traveling and all. Guru Nanak decided to live the life of a householder.

He selected the place which later became renowned by the name of Kartarpur Sahib, West Punjab, Pakistan.

Maradana, Nanak’s mother and father they all died peacefully in Kartarpur Sahib.

As the philosophy of his religion is based on Equality that’s why he also started the concept of Sangat (Religious Congregation) and Langar (Community Kitchen).

It doesn’t matter from which caste, creed and religion you belong, anyone and everyone is welcome to the Gurudwara.

His religion is open to all mankind. And by making people eat together Nanak started something revolutionary.

Rich, Poor, Orphan, Hindu, Muslim and Christian eating together. Could you imagine this he did in the midst of the 15th century.

As, Guru Nanak said in his lifetime that he was not a God. He was a man who was more closer to divinity.

And it was in Kartarpur Sahib that he left his body and his soul became United with the Providence.

The message of love, acceptance, peace, tolerance, humility which the First Sikh Guru preached throughout his lifetime is a prerequisite for the survival of the humanity.

I’ll conclude with these lines –

They wander from Temple to Temple, Mosque to Mosque, Church to Church and Synagogue to Synagogue. They fast just to keep him happy. They follow the rituals without knowing the content. Like a dead fish they go with the flow. Without realising that he resides inside them.