The Gift, 10 Spiritual Lessons For The World By Mahatma Gandhi

The Gift, and that gift was not only precious for him. But, also for the multitudes with whom he shared some of the important lessons of life that his world-renowned and revered grandfather, Mahatma Gandhi, taught him when he was a young boy. Sharing is caring. A must-read book.

Gandhi ji was like the Sun. A bright star, who always illuminated millions of people through his vibrant energy. Even now his creeds and deeds are inspiring an uncountable number of people worldwide. And those people were lucky who had received the guidance of life directly from him. The author of this book was one of those people who had received their tutelage under none other than, Mahatma Gandhi.

And the lessons which he learned from Gandhi ji not only helped him in becoming a better human being. But, it also helped the people around him. That’s why he called it as the gift from his beloved grandfather.

What is The Gift by Arun Gandhi?

The Gift by Arun Manilal Gandhi, is the life-changing experiences which the author got from his grandfather, Mahatma Gandhi. While living with the latter at his Sevagram Ashram, India. The author learned some of the important lessons of life, like whether it’s the anger control, the importance of solitude in one’s life, speaking up for the right thing, the importance of non-violence and other lessons. 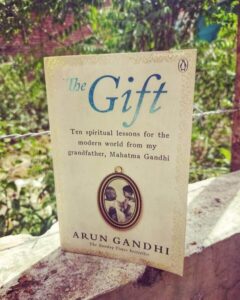 The Gift by Arun Manilal Gandhi

The book contains the following chapters-

The language of the book is easy to read. And in a story-type format, the lessons are explained by Arun Gandhi. The latter is the son of Mahatma Gandhi’s, second son, Manilal Gandhi. And I strongly recommend this book to all the readers out there. Even for beginners, this book is quite helpful.

Use anger for good

You must be the change you wish to see in the world, one of the many famous lines of Gandhi ji. None of us wants to experience someone else’s anger on oneself. But, one way or the other, we all faces these kinds of situations in our lives, isn’t it. In fact, we also vent our anger on others without realising the damage it causes to that person. But, still we commit the same thing time and again.

As a young boy, the author also faced the same situation, especially when he faced bullies. He wanted to take revenge on them. He even had some skirmishes with some of them. But, one day, his grandfather, whom he fondly called as Bapuji, gave him an important life lesson about anger. He said, better, you channel your anger for something good. Like electricity, if one uses it to give shocks to others, then it can take one’s life. But, if one uses the same electricity to illuminate the houses of others, than it creates wonders. The same we can do with anger. Let people say what they want, you just work on yourself and be a better human being.

Although, to divert the anger and that energy for something good requires patience and concentration. And it’s a process. With time and daily practice, one will be able to divert that energy for productivity. So, being angry is fine, it’s natural. But, make sure the anger won’t consume you and your peace of mind.

Don’t be afraid to speak up

Staying silent when seeing someone committing a crime, is also like participating in that act, though passively. That someone could be anyone. It may be your family members, friends, head of your country and others. As human beings, how can we let people do anything with impunity. Whether it’s active violence or passive violence. Even a minute thing that bothers you as a person should be challenged in the right manner.

Take this as an example. In Sevagram ashram, people were served very simple meals. When the author and his sister stayed there, they were also given the same like others. But, after eating the boiled pumpkin for several days, the younger sister of the author was fed up. And directly she went to confront her grandfather, Mahatma Gandhi.

She said, Bapuji, why can’t we eat any other vegetables other than pumpkin. Even Mahatma Gandhi got shocked. Because no one said anything about this issue to him. Not even one soul gathered the courage to tell him that day and night eating the same is too much.

He called the man who was looking after the cooking and all. And asked him why he was cooking the same boiled pumpkin everyday. The man thought Gandhiji wanted it, that’s why they never thought to ask him. They all behaved like a yes-man, unlike that young girl who decided to speak up her mind. Whether he was Mahatma Gandhi or someone else.

In a nutshell, speak up your mind. Human beings are not robots. They can challenge anything unjust. So, from next time, don’t be a silent spectator. Speak up and let people know what they are doing. So that they also know and rectify the same.

In this chaotic lifestyle of ours, we tend to forget the importance of peace of mind. That we all need solitude. But we ignore it without realising that sooner than later it will create issues not only for oneself but also for the other people around us. Because, at that time we just burst out. Like a volcano, everything comes out.

That’s why even Mahatma Gandhi decided that each Monday, as the day of silence. That’s his way of solitude. However, even on his day of silence he worked, but without speaking anything. We all need a space for ourselves. When we can think and collect our thoughts. In this way we can maintain our lives in a balanced way.

It’s up to you to decide what suits you better. For Gandhi ji, the day of silence worked. For you, something else will work. But, for that one has to try at least. Without it, life would remain more chaotic. So, we all should not only try to understand the importance of solitude; but we also have to work on it for our peace of mind.

You can go for this book for the following reasons,

1. Life lessons from Mahatma Gandhi.
2. A self-help book.
3. To understand Gandhiji and his thoughts in a better way.

I hope you like this article. Thanks for reading. Jai Hind.