The Good Girls, Padma And Lalli

The Good Girls, An ordinary killing; but it also exposed the vicious Indian system, which crawls with such a speed that even a snail can beat it. A story that shows a mirror to the world’s largest democracy and to those who are part of it. A necessary read.

One of the greatest revolutionaries of India, Bhagat Singh, once famously said. If the deaf are to hear, then sound has to be very loud. This he said when India was under the British colonial rule. However, India gained its independence in August 1947. But, even after seven decades of Indian independence, the system against which people like Singh fought and died for remains to date. A naked reality which people in India are aware of but don’t want to acknowledge it until they become victims themselves.

In fact, this system becomes more sadistic when it meets the part of India where the majority of the people resides. And where honour and land are closely related to one’s identity. And it’s the villages of India. The same villages which according to Mahatma Gandhi epitomize the real India. And like the sloth system of India, things in Indian villages also move at a snails pace. Especially, when it comes to women, their role, and most importantly, the honour associated with them.

So, let’s see what the Good Girls apprises us about all the things mentioned above.

What is the Good Girls by Sonia Faleiro?

The Good Girls, An Ordinary Killing by Sonia Faleiro tells us about the Budaun double murder case of the two village girls who happened to be cousins. 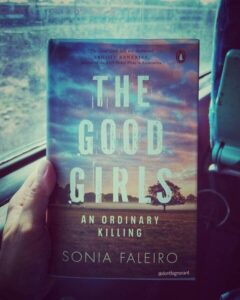 The story of these girls speaks itself about the society we are all part of. In fact, the author of this book needs to be lauded not only for her writing style, but also for presenting a balanced view of the entire scenario. I strongly recommend this book to all the readers out there. Especially, to women of Hindustan.

Two bodies but one soul-

People called them, Padma Lalli. However, Padma and Lalli were two people. But, their attachment towards each other was so powerful that it looked like they were two bodies but one soul.

Padma Shakya and Lalli Shakya were cousins from Katra Sadatganj, a village in the Budaun district of the Indian state of Uttar Pradesh. Padma was sixteen years old and Lalli was fourteen at the time of their deaths.

Their fathers and the other people from their family and the village couldn’t believe their eyes when they saw them in the mango orchard. Padma and Lalli were found hanging from a tree in May 2014.

For the Shakya family, it was surreal. In fact, things become more complicated as the days passed. And this nondescript Indian village became a hotspot for the Indian journalists and others so and so of India’s system and its associates.

In India, one thing which is omnipresent other than religion is the Indian Caste System. None can escape from its omnipotent graze. And the place where this can be seen and experienced is the countryside of India, especially in Northern parts of India.

And the most populated state of India, UP, is a state which is heavily caste-driven. And the Shakyas were from the other backwards classes (OBCs). And the people whom the Shakya family accused of raping and murdering their daughters were also from the OBCs, but the caste was different. The accused were from the Yadav community. And the main culprit according to them, was Pappu Yadav.

Padma, Lalli and Pappu, used to meet frequently but clandestinely. In fact, Padma and Pappu even had sex several times. And Padma had already broken the rule of honour by having premarital sex. Although, her family didn’t know about this. But, one night the girls were caught with Pappu by Nazru, their relative. And it changed everything not only for them but for the whole village.

The girls realised that sooner than later they would be killed by their family members. That’s why they didn’t return home after getting caught by Nazru. And they took a wrong decision afterwards.

The game of perception-

The Shakya family framed charges of rape and murder of their daughters against Pappu, his brothers and a few policemen. In fact, they didn’t let the bodies of their daughters be taken down from the tree. They said that they wanted justice. That’s why they demanded an investigation from the CBI (Central Bureau of Investigation).

However, the case was handed over to the CBI, and things also started showing some clarity. But, the story that the Shakya family built around the death of their daughters collapsed with the findings of the CBI.

The girls were so scared that they killed themselves by hanging from a tree. And no evidence of rape was found by the investigating agency. Although, the case is still in court. And who knows, when the Indian system will deliver its final verdict. Like the many pending cases. This one is also added to the long list of millions of other pending cases. A vicious cycle.

This book talks about different fault lines which have existed in India since time immemorial. Be it the,

All these issues affect the lives of multitudes of Indians. That’s why I recommend to readers out there to read books like these.

Staying silent is not an option when you know that the next person in line could be you, or someone you know!

I hope you like this, Thanks for reading. Jai Hind.