The Great Divide : The Story Of India’s Partition

A man who’d never been to India decided the fate of millions of people in July and August 1947, by drawing an artificial line which sealed the official boundary between the two newly created states, India and Pakistan. 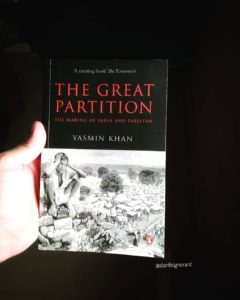 He’s none other than, The British lawyer, Cyril Radcliffe.

Although , Radcliffe was one of the many players who’d played their part in ‘India’s partition’.

But somehow his name remains deeply ingrained in the psyche of India and Pakistan.

There are several books written on India’s partition.

But, The Great Partition, The making of India and Pakistan is quite a good book because it almost covers all the aspects of  ‘Partition’.

The communal rift between the Hindus and Muslims.

The killings which followed afterwards.

The chaotic partition plan of Louis Mountbatten which created more confusion amongst the people instead of diffusing it.

The mass migration of people, and most importantly the suffering which the men, women and children alike faced due to partition.

Reading about India’s partition is like peeling an onion, one layer after another.

And with each layer you will come across something new.

Those who interpret it in ‘Black’ and ‘White’ terms, will surely miss the bigger picture.

The reason why India and Pakistan don’t trust each other lies somewhere in Partition.

Instead of removing the, ‘Iron Curtain’, the leadership of both the countries decided to belittle each other.

Let the ‘bygones be bygones’ should be the motto for the people of India and Pakistan.

But this is possible when we think as wise humans instead of acting like pre-installed religious robots.

I will end with these words –