The Great leader and the fighter pilot, The true story of the tyrant who created North Korea and the young lieutenant who stole his way to freedom is a good work of non-fiction, which tells us the story of two men and their different ideas of life. 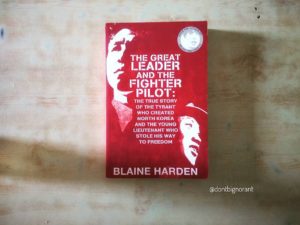 The Great Leader and the Fighter Pilot: The True Story of the Tyrant Who Created North Korea and the Young Lieutenant Who Stole His Way to Freedom

In 2002, the then, president of the United States of America, George W. Bush talked about the Axis of evil.

The three countries which he considered as an epitome of evil were Iran, Iraq and North Korea.

Although, with time and because of the new geopolitical conditions, Iraq was removed from that list, but Iran and North Korea are still there.

And between Iran and North Korea, the latter country still remain an enigma for the whole world.

North Korea, is a perfect example of a Totalitarian state.

A nation which not only admire people like Joseph Stalin and Mao Zedong but they also follow the inhumane policies of these two mass murderers.

How North Korea Was Formed :-

In 1905, the imperial Japan occupied the Korean peninsula and they ruled it with an iron fist until their defeat in the WW2 in 1945 by the allied forces.

As United States and Soviet Union were part of the Allied forces, so they divided the Korean peninsula amongst themselves.

An imaginary line of 38th Parallel was drawn on the Korean peninsula.

That’s how this rogue state came into its being.

Kim-il-sung was the founder of the ‘Kim dynasty’ and the first president of North Korea.

Kim Il Sung was the puppet of Stalin and Mao.

These two people helped him through thick and thin.

Although, Kim was considered as an incompetent and a reckless person by them.

But somehow he not only successfully established his family cult in this rogue state, but he also outmaneuvered, Mao and Stalin when it comes to megalomaniacism.

Joseph Stalin was the man whom Kim Il Jung idolized.

He not only followed the principles of Stalinism but he also made sure that his heirs will also follow them, which they did quite successfully.

Other than Kim, the book is also about the story of a korean boy who not only became the youngest fighter pilot in North Korea but very smartly he fooled the then North Korean administration and flew with a Mig-15 towards South Korea and later he became a citizen of the USA.

The author of this book has really done a good job. Those of you who are interested in reading about rocket man’s country then you can surely go for this book.

I will end with these lines –

‘Facts are many, but the truth is one.’