The man who was not born to be king : Wajid Ali Shah

The last king in India, Wajid Ali Shah, is beautifully narrated book about the life and times of the last ruler of the kingdom of Awadh. 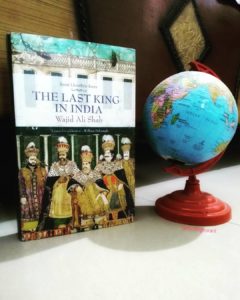 The main USP of this book is that the author has highlighted both the positives and negatives of the man who never forgot that he was a king, and did not allow others to forget it.

The kingdom of Awadh was the last kingdom in India to be annexed by the British East India Company in February 1856.

And it was annexed by the ‘East India Company’ without being a single shot fired.

Who was Wajid Ali Shah?

Wajid Ali Shah was the last ruler of the kingdom of Awadh, India.

Wajid Ali Shah, was born in 1822, at that time the ruler of Awadh was his great-uncle, Ghazi-ud-din Haidar.

In fact he was not born to be king.

But, because of some extreme circumstances his grandfather was placed on the throne by the British East India Company.

After the death of his father, King Amjad Ali Shah, he came to the throne in 1847.

Before being anointed as a king, Wajid Ali Shah was considered as an incompetent person by the company.

And to a some extent because of his extravagant lifestyle he proved that the company was not wrong about him.

And in that years his main concerns was enjoying the hedonistic lifestyle.

He had married approximately 375 women in his life time.

Though he was a prolific writer in his own sense.

He had directed few dramas, composed poems, and also written an autobiography by the name of ‘Ishqnamah’.

But as a ruler of a kingdom he proved his incompetency during his life time.

After the annexation of his kingdom he decided to live in Calcutta, and he remained there till his last breath.

He created his own mini-kingdom in his ‘Garden reach’ house in Calcutta.

For History lovers this book is a must read.

And for others I would say that reading about one’s own country and its past is like an elixir which needs to be consumed on a daily basis.

‘A child educated only at school is an uneducated child’.