The Sacred Sword, The Legend Of Guru Gobind Singh

The Sacred Sword, and that sword ensured that no one could ever dare to think about annihilating the religion whose foundation was laid by Guru Nanak in the mid 15th century. A must-read book.

When Baba Nanak started preaching about his philosophy of oneness of God, love, acceptance and humanity. He received oppositions from several quarters. But, there was no violence towards him as such. However, the religion which he started, i.e. Sikhism began to attract followers. Slowly and steadily a community started to form. The more his name and fame reached to the nooks and corners of the land of Hindustan. It also reached to the ears of the then rulers of Hindustan, The Mughals.

Till the time of the third Mughal emperor, Akbar, relationship with the Sikh Gurus were remain cordial. But, it changed with the arrival of the Fourth Mughal Badshah, Jahangir. The latter was a sadistic emperor. In fact, the fifth Sikh Guru, Arjan Dev, was tortured to death on the orders of Jahangir. And this particular incident became a watershed moment in the history of the Sikhs. And the sadistic legacy of Jahangir was carried forward by his grandson and the sixth Mughal emperor, Aurangzeb.

Aurangzeb, did everything to exterminate the Sikhs and their religion. He used various means, both cruel and horrific. But, he failed every time. However, he brought the ninth Sikh Guru, Teg Bahadur to Delhi. Told him to convert to Islam. But, the fearless Guru Teg Bahadur ji refused to budge from the faith of Baba Nanak. And Aurangzeb ordered the beheading of the ninth Sikh Guru. This incident is a major turning point in the history of the Sikhs. Because, after that a young child became the Guru. And he gave the Sikhs not only a new identity; but he also taught them how to face the tyranny of the tyrants with the help of the sacred sword.

What is The Sacred Sword by Hindol Sengupta?

The Sacred Sword, The Legend Of Guru Gobind Singh, is the fearless story of the life and times of the tenth Sikh Guru, and his journey from a young child to the establishment of the Khalsa and afterwards. 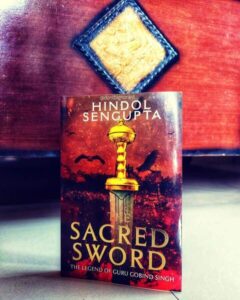 The language of the book is easy to read. In fact, the writing style of the author needs to be lauded. Within a few hundred pages, the author told the ups and downs of the life of Guru Gobind Singh ji.

The Faith of Nanak

Guru Teg Bahadur, face was serene. He saw how brutally his three beloved disciples were killed by the Mughal executioners. The Qazi told him that his life would be spared if he accept Islam. But, Guru was not only fearless but he had firm belief in the deeds and creeds of Baba Nanak. He refused to budge.

The inhumane executioner beheaded the 9th Sikh Guru, in Chandni Chowk, Delhi. Before his death, Guru kept murmuring the words of Nanak. His eyes were towards the Sky before the sword touched his neck. And when the sword touched him he was already looking upwards and united with the beloved God.

Though, Aurangzeb ordered his killing. But, he can’t remove the name and fame of Guru Teg Bahadur ji. His firm faith in the words of Baba Nanak made him immortal in the annals of history.

He was barely ten-years old, when he saw the head of his father, Guru Teg Bahadur. Instead of crying, young Gobind Rai transformed into a fearless man. When the messenger brought the head of the beloved guru to Anandpur, people couldn’t control their emotions. He gave his life for the cause of freedom. And they ensured that posterity remembers the martyrdom of guru Teg Bahadur, forever.

However, after the killing of his father, Gobind Rai became the 10th Guru of the Sikhs. But, he knew that the battle had just begun. And he had to protect the freedom and cause for which his father and other gurus gave up their lives. The challenges were manifold. But, he was not an ordinary man. He was the great Guru Gobind.

In fact, look at these immortal lines of Guru Gobind Singh Ji. It tells us about his philosophy,

( I shall make the sparrow fight the hawk
I shall make lion out of jackals
I will teach one man to fight 1.25 lakh
Only then will I be called Gobind Singh! )

As time passed, Guru Gobind fought and won many battles against the neighbouring Kings and the Mughals. But, one day he decided it was time to give the fearless Sikhs a distinct identity.

In the late 17th century, on the day of Baishaki, Guru Gobind Rai gave the Sikhs the title of Singh for men, and Kaur for women. He became Guru Gobind Singh. In fact, on that auspicious day he established the Khalsa (Pure) Panth. And gave the followers of the Sikh religion a few commandments which they have to follow through thick and thin.

However, the Mughal emperor, Aurangzeb, who killed his own brothers for the throne, including the designated heir of Shah Jahan, Dara Shikoh, wanted the complete annihilation of the Sikh community. Guru Gobind Singh was well aware of the devious plans of the emperor.

In fact, the battle ensued between the Sikhs under Guru Gobind Singh, and the Mughal forces. In this battle, Guru and his forces fought valiantly. But, he lost his four young sons in the battle. Two older sons, Ajit Singh and Jujhar Singh, died in Chamkor, Punjab, while fighting the Mughal forces. Two younger sons, Zorawar Singh and Fateh Singh, refused to convert to Islam and they were bricked alive by the infamous Mughal Governor of Sirhind, Wazir Khan. In fact, the moment Mata Gujri, mother of Guru Gobind Singh, heard the news of the bricking of their grandsons, she died.

And before leaving his body, Guru told his followers that after him the, Guru Granth Saheb is the living epitome of all the Ten Sikh Gurus. And they will find him and the other Gurus, in the immortal words of Granth Saheb. With that he left his body and united with the Almighty.

This book tells us,

1. A brief history about the life and times of Guru Gobind Singh.

2. Fearlessness of the Sikh religion.

5. Freedom and identity are worth dying for.