The Story of the Bengal Tiger : Syama Prasad Mookerjee

In Fact this is the only complete biography we have at present on Dr Mookerjee.

Before talking about Syama Prasad Mookerjee, and who he was, and about his contribution in the Indian freedom movement and afterwards.

I wanna tell you one thing for sure, that if you belong to the state of West Bengal, India, then you should read this book at least for once.

Because what he did for West Bengal and its inhabitants is really commendable. 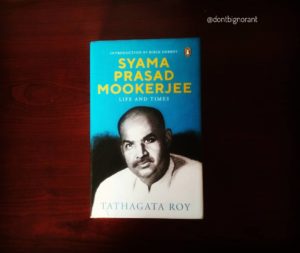 When India gained its Independence on 15 August 1947, at that time there was only one pan-india political party, The All India Congress Party, under the dynamic leadership of Jawaharlal Nehru.

In fact very few people could challenge the leadership of Nehru and his policies and decisions.

But, there was a man who after the death of Gandhiji and Sardar Vallabhbhai Patel, constantly challenged Nehru and his decisions, and he was none other than Syama Prasad Mookerjee.

Who was Dr Syama Prasad Mookerjee?

His father, Sir Ashutosh Mookerjee was a renowned personality, and a brilliant educationist, and also the former vice chancellor of Calcutta university.

In fact, Dr Mookerjee was himself became the vice chancellor (VC) of the Calcutta university (CU) when he was only 33- years old, and he was the youngest VC India ever have until now.

As the VC of the Calcutta University (CU), Dr Mookerjee did some of the brilliant work as an administrator.

As you people are already aware of the fact that CU the oldest University in the Indian subcontinent, was founded in 1857.

And because of his stature as an brilliant educationist, Dr Mookerjee entered the Bengal legislative council in 1929 as a nominee of the Congress party.

Though he didn’t like the appeasement policies of the Congress party, that’s the reason that he never joined the Congress, instead he joined the Hindu Mahasabha and became its all-india president.

But when he realized that the Partition of Hindustan was inevitable he concentrated his focus on the issue of Bengal.

As Muslim league and its leaders was against the Partition of Bengal, and they demanded the whole of Bengal to be included in their so-called fancy land Pakistan.

And Dr Mookerjee realized that if the whole of Bengal is given to Pakistan then the Bengali hindus will be treated as a Second Class Citizens by the Muslim league and their communal government.

And the best example of this communal bias of the Muslim league was the ‘Great Calcutta killings’ of 1946, and Nokahali because of which uncountable number of innocent people lost their lives.

That’s why Dr Mookerjee worked tirelessly for the Partition of Bengal, and finally because of his dedication and sagacity a newly created state of West Bengal came into its being.

And when India gained its Independence he was inducted by the then Congress government in 1947 as the independent India’s first cabinet minister of Industry and supply. Though he was a non congressman.

But because of the ‘Delhi Pact’ with liaquat Ali Khan (Pakistan’s first prime minister) he resigned from the cabinet.

In fact because of the sufferings and unabated killings of the Bengali hindus in East Pakistan (now Bangladesh), he established his own political party, the BJS, as an alternative to the Congress.

And other than highlighting the issue of Bengali hindu refugees, Dr Mookerjee also took the cause of the people of jammu who was then fighting against the communal policies of the Sheikh abdullah government in the state of Jammu and Kashmir.

But it was a sad tragedy that Syama Prasad Mookerjee died (or killed) mysteriously in Srinagar on 23 June 1953.

Though the author of this book blamed Nehru and Sheikh abdullah for the death of Dr Mookerjee.

As there was no official inquiry conducted after his death so we don’t know the real truth behind his tragic and sudden death.

After reading this book I can say that it is a sad reality of this country that other than knowing about Mahatma Gandhi and Jawaharlal Nehru, We are totally ignorant about the other Brave Sons and daughters of mother india who fought bravely and sacrificed their precious lives for the freedom of this great nation of ours.

I hope you like this, Shukriya for reading, Jai Hind.