The Story Of The World’s Largest Political Party : BJP

According to Mahatma Gandhi, If I seem to take part in politics, it is only because politics encircles us today like the coil of a snake from which one cannot get out, no matter how much one tries. I wish therefore to wrestle with the snake.

The Saffron tide, the rise of the BJP, is a concise biography of the,World’s largest Political Party, The Bhartiya Janta Party (BJP). In 2015, BJP became the world’s largest political party. And whose story is like from the rags-to-riches. 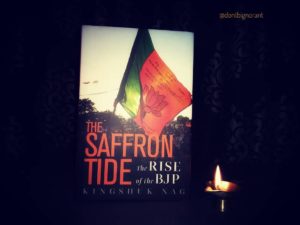 The Saffron tide, The rise of the BJP by Kingshuk Nag

The foundation of this party was laid by  Syama Prasad Mookerjee in 1951, when he established the Jana Sangh (Predecessor of the BJP) as a reaction to the problem of Bengali Hindu refugees. Though Mookerjee died in 1953 due to unforeseen circumstances in Kashmir.

And at that time to make Jana Sangh as a relevant political entity in the Indian democratic system others leaders came forward and one of them was Deen Dayal Upadhyaya.

Though in the initial years of its formation Jana Sangh was not a serious contender because the Indian National Congress (INC) under the dynamic leadership of Jawaharlal Nehru outsmarted all the other political parties including the Jana Sangh.

In fact from 1947 to 1977, the INC ruled India, in centre as well as in majority of the Indian States. But things started to change when Indira Feroze Gandhi, declared the internal emergency on 26 June 1975, and jailed all the important leaders of the opposition parties.

And at that time the leaders of the opposition parties decided to form an united front to challenge the dictatorship of Indira Feroze Gandhi, and hence the ‘Janata Party’ was formed with the blessings of Jayaprakash Narayana.

Though we have to keep in mind that the only thing which united the Janta party at that time was their common hatred for indira Gandhi. But the people of India was so fed up with the emergency that they decided to teach Indira and her son Sanjay a good lesson, and the INC lost the election of 1977.

In fact both Indira and Sanjay lost their loksabha seats. And finally the Janta party came to power in 1977 with Morarji desai as the prime minister of India.

As Janta party was formed in 1977 by merging various political ideologies, so we can conclude that it was kind of a mixed vegetables soup whose taste no one could’ve predicted. That’s why within 2-years, because of the internal bickering amongst the various factions of the party, the Janta party government collapsed.

With the fall of the Janta party government the leaders of the Jana sangh realised that to remain relevant in the Indian politics they have to reinvent their political party with a new creed and ideology.

That’s why in the year 1980, the Bhartiya Janta Party was born. And, Atal Bihari Vajpayee was elected as the first president of the BJP. But the watershed moment came for the BJP in the 1990s when the Ram Janmabhoomi movement was launched by the various right wing organisations.

At that time the rising star of BJP, Lal Krishna Advani decided to ride the tiger, and because of his brilliantly designed strategy and organisational skills the BJP gained the political power in the most populous state of India, UP.

Although, BJP gained the Hindu vote bank because of the Ram Janambhoomi movement, but at the same time on 6 December 1992 Babri masjid was demolished by some fanatics.

In fact some of the senior leaders of the BJP were present at the location when Babri masjid was demolished. But finally in 1998 the BJP came to power and Atal Bihari Vajpayee became the prime minister of India.

Although, the government led by vajpayee had done a good amount of work when they were in power. But because of overconfidence they lost the 2004 Lok sabha elections. And they remained in the opposition for a decade.

Though in the 2014 Lok Sabha elections the BJP under the leadership of ‘Narendra Modi’ captured the political power with a majority of their own, and with this Modi became the Prime Minister of India. And the supreme leader of the World’s largest Political Party.

Although, this is an average book, only a limited amount of information is there, and if you are a keen observer and reader of the ‘Great Indian Politics’ then you can skip this book. But for beginners this book is quite good.