The Tattooist Of Auschwitz: Lale Sokolov And His Story

The Tattooist of Auschwitz by Heather Morris proved that if there’s a will there’s a way too. In fact, when it comes to survival no one could beat the spirit of human perseverance and resilience.

Although, home sapiens are resilient but at the same time we are one of the most cruelest creatures of this planet earth. There are so many examples to quote when it comes to the brutality of the human race.

In this 21st century era majority of us are aware about the terrorist organisations like the Daesh (ISIS), Al Qaeda, the Taliban and many more like them. The way these people butcher humans in the name of religion (In their case it’s Islam ) is well known.

But, around eight decades ago another group of people, precisely a country (Nazi Germany) under the horrible guidance of Adolf Hitler, annihilated multitudes of humans just because they belonged to a different faith other than theirs.

The people they annihilated were Jews. The term which defines the nature of Nazi barbarity are called as the Holocaust.

The term Holocaust not only carries a burden too heavy and painful but at the same time it reminds all of us that how cruel or low, humans can stoop too.

So, let’s see what the tattooist of Auschwitz tells us about that time and what we can learn and unlearn from those incidents.

What is the Tattooist of Auschwitz by Heather Morris?

The Tattooist of Auschwitz by Heather Morris is a Holocaust novel based on the story of Lale Sokolov. It’s a tale which tells us about those horrific events which no sane person wanna experience in his or her lifetime. 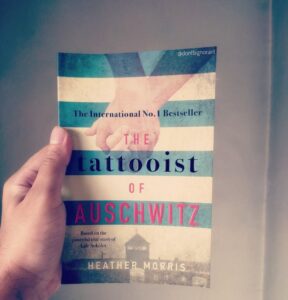 The tattooist of Auschwitz, Lale Sokolov

It’s a story of utmost sacrifice, gratitude and most importantly it’s about hope and forgiveness.

Lale, his family and the sacrifice –

Lale, a Slovakian jew was living comfortably with his family in Slovakia. Love and care of parents were there for him. But, the second world war was going on and the stories which they hear about the jews was in the air too. It was just a matter of time and they will come after Lale’s family too.

So, to save his family from the Germans Lale volunteered that he will go wherever the Nazis wanted him to go. Although, his elder brother wanted to go in place of Lale. But, Lale knew that his elder brother is a married man. And he can’t let anything happen to him and other family members.

So, with tears in their eyes, Lale’s mother, father, and other family members came to the railway station for a last goodbye. With a heavy heart they let him go. They didn’t knew that they will see him again or not.

Lale had no clue either that where the Germans will take him. The only thing he knew that somehow he wanted to save his family. And he’s doing this for them.

The Nazis took him and several other Jews of different European nationalities to a cattle train. They were forced to sit inside the carriage like cattles. Some of them were scared. It was a journey onto the unknown.

Although, the sacrifice which Lale did for his family will be the beginning of the many sacrifices which he will committ for those with whom he neither had any blood relations nor friendship.

It was the year 1942, Lale and others like him were brought to the infamous concentration camp of Auschwitz-Birkenau, Poland. They were scared to hell including Lale.

Although, Lale brought a suitcase with few books and clothes with him but the notorious SS soldiers of the Nazis took everything from them. They were told to form a line and they did the same.

Within a few minutes Lale and other Jews in the camp were robbed of their identity. Each one of them were given a number. It’s not only a number it’s a scar which will remain with them until their last breath.

Lale was stabbed with number, 32407. It was tattooed in his left arm. This was Lale’s new identity. Number, 32407, Lale Sokolov prisoner of Nazis in Auschwitz-Birkenau.

Like we give numbers to animals the same Nazis did with the Jews in the concentration camp.

Although, Lale was armed with a new identity. But, he was a polyglot too. A skill which will help him in one way or the other.

Lale was assigned a place to sleep in block number 7 of the concentration camp. In his first night at the camp he saw the inhumane nature of the Nazis. Around midnight he received nature’s call so to answer it he went outside. When he went to the place to relieve himself he saw three Jews were already there. In fact, within a few seconds the SS soldiers shot the three of them to death.

Lale was numb. Without relieving himself. He ran towards his compound. It will be the beginning of many brutalities which he will experience.

As prisoners the Jews were made to work in the camp. They were given meager ration to survive. And Sunday was off day for them.

Although, the Tatowierer who gave Lale the tattoo was a prisoner too. He was a French and somehow he found Lale quite fascinating. So, he managed to make Lale as his new assistant. A tough job.

Because, Tattooing the arms of men is one thing; defiling the body of young girls is horrifying.

But, within few days that French man was vanished from the camp. And Lale Sokolov was made as the Tattooist of Auschwitz-Birkenau.

Love and hope in the midst of hell –

Love grows wildest in the gardens of hardship.

The same we can say about a love story which will blossom in the midst of a place which is as close to hell.

As, being the Tatowierer, Lale was provided with some extra ration. He could have consumed all for himself. Especially, in a place where people were given food in the name only. But, he didn’t.

In fact, he used to distribute that extra food amongst his fellow prisoners. Because he knew that sharing is caring and he followed that principle in letter and spirit.

But, one day Lale saw a girl in his camp. She was brought as one of the many women prisoners. As being the Tatowierer he had to give her the number. But, for Lale it was love at first sight. He didn’t want to give any pain to that beautiful creature while Tattooing her.

She was brought in front of him. With kindness he gave her the new identity. 34902, that’s the number which he inked in her left arm. Her name was Gita.

As, Lale carried on with his life in the camp. The love also blossomed between him and Gita. They used to meet discreetly at the camp. In fact, several times they made passionate love to each other. A bond so strong was developed between them that no one could break them.

Although, Lale was sharing his ration with others. But, somehow he also made arrangements with some women prisoners who were working at a place where they used to segregate stolen products from the Jews.

These women prisoners used to smuggle money and jewels from that place and then they give them into the safe hands of Lale.

With that money and precious stones, Lale used to buy some chocolates and food for his fellow prisoners. He used to purchase these products from the locals who were also working in the camp but they were not prisoners.

Lale took the risk. He knew that if he was caught with that amount of money and diamonds. The SS soldiers won’t hesitate to shoot him.

But, he just wanted to save his people. In fact, after some time he was caught. He was taken to a different camp. Beaten black and blue. His chances of survival were minimal. But, he knew that Gita had a friend by the name of Cilka. He managed to pass a message to Gita and Cilka that he was alive but at a different camp.

Although, Cilka managed to save the life of Lale. And Lale also knew that she was able to do that. Cilka was selected as the concubine of the head of the camp. And for her also it was all about survival. But, at least she saved the life of Lale Sokolov.

As days turned into months and months into years. Lale and his life in the camp goes on. Life became harsh. Several friends of his were killed in cold blood. Just because they were Jews.

But, things were change for sure. Hitler and his forces were on the verge of losing the second world war. In fact, amongst the SS soldiers there were panic. As they were losing the battle so one day they separated the women of the camp and took them away.

Lale and Gita thought that they were seeing each other for the last time. But, destiny had planned something else for them.

Although, Gita was able to escape from the clutches of those notorious SS soldiers. And she reached safely to her place.

In fact, Lale was able to escape too and after that for few days he also worked for the Russians. As, being a polyglot helped him in several ways. But, one day he ran off and managed to reached to his house.

But, when he reached his home. He saw only his sister. His other family members were killed by the Nazis including his beloved mother and father.

Although, Lale had already seen too many deaths. And now his only motive to find Gita and marry her. In fact, he managed to find Gita. He proposed her for marriage.

And Lale Sokolov and Gira Furman married happily to each other in the year 1945. After enduring so much of pain and struggle they managed to survive.

In fact, after living here and there in several European countries. Lale and Gita finally settled in Australia.

Lessons to learn and unlearn –

The Tattooist of Auschwitz has too many lessons to offer which we can learn and unlearn at the same time.

First and foremost thing which we can learn is that hope will not only shows us a way but at the same time it acts like oxygen for us, isn’t it.

Secondly, Kindness and gratitude will remain as one of the many jewels which human possess inside themselves. Although it’s a different matter if we use them or not.

And lastly the most important thing to unlearn from this story is that hate will not only destroy an individual in fact it has the power to destroy the entire human race.