The Untold Vajpayee: Politician and Paradox

The untold Vajpayee, Politician and paradox is a readable Biography of Atal Bihari Vajpayee. The latter was the former Prime minister of India. 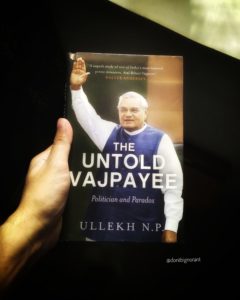 Vajpayee, the poet politician and a brilliant speaker of his time started his journey from “Gwalior”. He completed his schooling and graduation from Gwalior.

For his higher studies he received the scholarship from the Scindia royal family, and completed his MA from political science from Kanpur.

He was also influenced by the philosophy of “Arya Samaj”

Later in his life he joined the BJS (Bhartiya Jana Sangh), and worked under the guidance of Syama Prasad Mookerjee and Pandit Deendayal Upadhyaya.

In 1957 he entered the parliament for the first time from balrampur constituency.

In Parliament he was influenced by the charisma of the first PM of independent India, Jawahar Lal Nehru.

In 1977, When the Janata party government was formed he became the external affairs minister of India.

At that time he showed his vision when he travelled to several countries of the Indian subcontinent.

In fact he was the first Indian and the first person ever to speak in Hindi on the platform of the UN (United Nations).

In 1980 when BJP (Bhartiya Janta party) was formed he became its founding president.

And under his leadership Bharatiya Janata Party (BJP) gained acceptance amongst those people who considered his party as an extreme right-wing.

The first time he became the PM of India in 1996. Though, his government lasted only for 13 days.

But during that time he utilized the platform of parliament by making a brilliant speech for his party and ideals.

In 1998 again he became the PM of India. At that time his government lasted for only 13 months.

But during that time the “Kargil War” started between India and Pakistan. And he showed his leadership during the war.

His government was renowned for the peace initiative with Pakistan, and the pro-market reforms and development of highways and roads.

Although, his party lost the elections in 2004.

But, still Atal Bihari Vajpayee is revered throughout India. And considered as the most beloved PM of India.

I will end with these lines of Atal ji :-

‘Let no one challenge India’s secularism.’