Train To Pakistan By Khushwant Singh

Train to Pakistan by Khushwant Singh epitomizes the sentence that says, Love knows no boundaries. 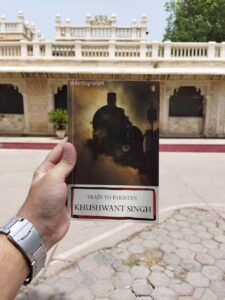 This partition opened a Pandora’s box in 1947, whose repercussions can be felt even today. The cocktail of ignorance and religious fundamentalism which was given to people in the year 1947 showed that how low a human can go in the name of religion which in reality they never understand what it means and signifies.

Although, both India and Pakistan have seen little bit of development but when it comes to religion nothing has changed. The same mindset which created the havoc in 1947 is still present in this 21st century. An irony in itself, isn’t it.

So, let’s go and see what the train to Pakistan by Khushwant Singh tells us about the madness of 1947.

What is Train to Pakistan?

Train to Pakistan is a modern classic fiction written by Sardar Khushwant Singh. It’s a story of a nondescript village on the border of India and Pakistan by the name of Mano Majra.

The soul of India lives in its villages.

The same we can say about the village of Mano Majra and its inhabitants. Hindus, Sikhs and Muslims were living their lives peacefully as their forefathers did for thousands of years.

Although, they were aware that the angreji (English) sarkar was no more and the government of Mahatma Gandhi and his disciple Jawaharlal Nehru took over the reins of Hindustan.

But, for them nothing has changed. They’ve to follow the same daily routine which they were doing for uncountable number of years. Men went to their fields to work, children play along the small lanes of the village, women have to take care of their homes. This was the life which they were living nonchalantly.

Although, the village of Mano Majra was close to the border with Pakistan but this small hamlet was remained untouched from the riots of 1947 until the murder of the hindu moneylender, Ram Lal.

Beginning of the chaos-

The family of Ram Lal was the only hindu family in Mano Majra. Others were Sikhs and Muslims. The latter were the tenants of the former. This was the hierarchy of this village.

But, one night few dacoits had entered the village of Mano Majra and they not only looted the house of Ram Lal but they also killed him. The suspicion of this killing was fallen on the shoulders of Juggut Singh aka Jugga Badmash. But, it was the gang of Malli who were behind this incident.

Although, Jugga was a criminal but he was also a resident of Mano Majra. And the villagers also knew that a fellow villager couldn’t do such kind of acts. In fact, Jugga knew that it was the gang of Malli who did this. He saw them with his own eyes. But, he couldn’t tell this because of a reason. A reason which was very close to his heart. A reason for which he gave up his life. A reason which will immortalize him.

Jugga, A Sikh guy and Nooran, A Muslim girl. Both love each other. Although, they knew that couldn’t meet freely that’s why they meet at the darkness of the night.

Under the dim white light of moon they embrace each other. In fact, the day Ram Lal was murdered, Jugga and Nooran were making love on the banks of a river.

The place where they became one body and one soul. They both were aware that something bad had happened in their village that’s why they went to their houses discreetly.

Although, Jugga was a criminal in the eyes of the police. And when he went to his house he saw several people and that’s why for few days he decided to hide himself in the nearby jungle.

While Jugga was hiding in the Jungle. A man by the name of Iqbal came to the village of Mano Majra. He was an educated man with leftist outlook. In fact, he was a comrade who came to spread the ideology which he professed.

Iqbal went to the Gurudwara of Mano Majra and introduced himself to the caretaker of the Gurudwara. Bhai Meet Singh was the caretaker. He welcomed Iqbal and said, Sat Shri Akal, Iqbal Singh Ji. Although, Iqbal never told him about his surname. But, Meet Singh assumed that he was a Sikh which in reality he was.

Iqbal is one of the few common names which the Hindus, Sikhs and Muslims uses to this day. Although, Iqbal came to Mano Majra after the murder of Ram Lal but he also came under the suspicion of the so-called system.

This system is the bureaucracy. From convicting an innocent person to a crime which he never committed to delaying the projects for satisfying their egos. This is the kind of system that operates in India.

And the people who manages this system are known as the Babus. In Mano Majra, Deputy Commissioner, Hukum Chand was the system. On his orders, Iqbal and Jugga badmash were arrested on the charges of Murder of Ram Lal.

Although, Hukum chand knew that both of them had nothing to do with the murder but you need scapegoats, isn’t it.

As Jugga had experienced the hospitality which the police gave to its visitors several times that’s why he told them it was the gang of Malli who were behind the dacoity and the killing of Ram Lal.

But, A train to Pakistan arrived on the station of Mano Majra and this will gave rise to something which the inhabitants of Mano Majra had never seen or experienced before.

On 3 June 1947, Lord Louis Mountbatten announced the partition plan of India. Prior to that killings were already started, especially in Bengal.

In 1946, a year before India’s partition, The Bengalis started killing Bengalis. They had shown the way to the rest of the people. The killings which were started in Bengal created a havoc in the province of Punjab.

In between all of this, Trains started carrying people from one side to the other. But, one day a train brought dead bodies to the station of Mano Majra. Hundreds of people were butchered.

The villagers of Mano Majra couldn’t believe their eyes. Too many dead bodies. Soldiers came to their village for wood and oil. They had burnt all the bodies. It was the largest cremation which they had ever seen.

Refugees also started pouring in the village of Mano Majra. They also brought stories of horror with them. Like how Muslims butchered their daughters and sisters. It changed the atmosphere of Mano Majra.

The soldiers told the Muslims of Mano Majra to pack their belongings. They had to leave their village for Pakistan.

Nooran, the love of Jugga also went with the rest of the Muslims of Mano Majra. But, before leaving she told the mother of Jugga that she was pregnant with the child of Jugga. She hoped that Jugga will bring her back to his house after the things were cooled down.

Although, Jugga was in prison. But, he was released along with Iqbal. In fact, the gang of Malli was also brought to the police station only to be released later.

In fact, the gang of Malli and some refugees decided to give a tit for tat to the other side. So, they decided to attack the train which will take the Muslims to Pakistan.

And this train also carrying the Muslims of Mano Majra. But, Jugga came to know about this plan and as long as he is alive he won’t let anything happen to his beloved, Nooran.

So, before his final act Jugga went to the Gurudwara and took the blessings of the Guru. When the Train to Pakistan came near the railway bridge to go to the other side, the same Jugga who was badmash for the police, singlehandedly ruined the plan of the attackers.

While saving the life of his beloved Nooran, Jugga was shot several times and he came under the train. The same train which carried his Nooran. Although, the train safely went to Pakistan. But, it also carried a part of Jugga with him.

I’ll conclude with these immortal words of the legendary, Faiz Ahmed Faiz,

(What else is there now for me to view

I have experienced being in love with you.)