Untouchable by Mulk Raj Anand is a living epitome which tells us that very little has changed in India when it comes to Untouchability. Although, this novel was first published in 1935, but you will find the same casteist mindset which was prevalent back then can be easily seen even in today’s modern India. An irony in itself.

In India, We have the caste system amongst the Hindus. Its origins traced back to the Vedic age which was around approximately 3000-4500 years ago.

According to this caste system, The Hindu society is divided into the four groups –

. Brahmins ( Scholars or The Priestly Class)

. Kshatriyas ( Warriors or The Rulers )

The Shudras Or the Untouchables

The Shudras were considered as the lowest in the caste hierarchy. From ages these people were given menial jobs like cleaning of latrines, removing the skins of the dead animals, and other menial tasks which the other three castes considered as inhuman or dirty.

Although, Article 17 of the Indian Constitution talks about the abolition of Untouchability. In fact, practising Untouchability in any form is a criminal offence in India. But, it’s an irony that this article is followed only in letter not in spirit.

In fact, the main character of Untouchable, Bakha said,

They think we are dirt because we clean their dirt.

So, let’s explore this journey with Bakha

What is Untouchable by Mulk Raj Anand?

Untouchable by Mulk Raj Anand, describes a day in the life of an Indian sweeper by the name of Bakha. 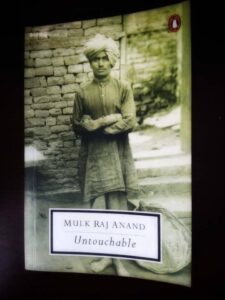 Bakha was born in the town of Bulashah, British India. His mother died when he was a young child. His father, Lakha was the Jemader or the Head of all the sweepers of the town and the cantonment.

Rakha and Sohini were his younger brother and sister. They had a one-room mud house in the outcastes colony of Bulashah.

From the age of six Bakha started working as a sweeper in the latrines. Although, he never liked it but he had to do it. In fact, Bakha wanted to study when he was a child.  He told this to his father the same but to no avail.

Because, who will teach to the son of a latrine cleaner. Although, this story was written when India was a British Colony. But, even today you will find people here and there in India who don’t even allow their sons and daughters to play with the children of the lower castes leave alone the education.

So, everyday Bakha had to clean the shit of those people who love to shit but they never wanted to clean their own shit. Interesting, isn’t it. Even the word hypocrisy will hide his or her face from this vicious act of Indians.

Although, Bakha didn’t like this work but he did his work with full dedication. That’s why when Havaldar Charat Singh, the famous hockey player of the 38th Dogras regiment came to the latrines and said to Bakha in a rowdy tone that why the latrines were not cleaned. And as soon Bakha heard this he cleaned the latrines for Charat Singh. When the latter was done with his nature’s call then he told Bakha that he will give him a hockey stick.

The same Bakha who always questioned himself that why people abuse him for no reason thought that people were not that bad. This servile attitude which ingrained in his mindset because of the kindness of a few bounced back whenever he thought of rebelling against this work.

Although, people of Bulashah came to the latrines and answered the nature’s call. But, for Bakha this vicious cycle won’t stop. He had to visit the main town also to clean the outer chamber of the temple. Because, his father ordered him to. And he can’t deny it.

The touch of a sweeper

After cleaning the latrines Bakha went to the town to finish the work there. So, he entered the main town which was full of pomp. While he was walking to the road which led to the temple a stranger passed near by him. And that’s it.

Polluted! Polluted! That man started raising hue and cry just because he mistakenly touched Bakha. People gathered around Bakha, they started abusing him. In fact, he even slapped Bakha.

For an eighteen old teenager who was just doing his work, and that too the cleaning the shit of these buffoons, humiliation and a slap was too much to bear. Bakha wanted to cry but he ran off from that place.

He questioned himself. Why they humiliate us? Why? Just because we clean their dirt.

Even after this physical assault he went to the temple for cleaning. But, when he reached there he saw his younger sister, Sohini was already there. Although, during that time and at some places in India even today people from the lower castes are not allowed to enter the inner sanatorium of the temple.

But, Bakha wanted to see the God whom these people worship. So, with courage he climbed few stairs of the temple and saw the statue of one of the Hindu Gods there.

But, within a few seconds he heard the cry, Polluted! Polluted! . The temple priest was behind him and his sister too. Although, the temple priest tried to molest Sohini and when she resisted he shouted Polluted.

When Sohini narrated the whole incident to Bakha. The latter wanted to kill that priest. But, Bakha told her sister to go home and he will join them soon.

Alone in this cruel world

First he was humiliated and slapped for no reason, then the priest tried to molest his sister. The people were too cruel to them, isn’t it. Bakha was alone in this cruel world. He was forlorn. But, even after all of this he had to fetch food for his family. So, he went to the alleys of the town in search of food. But, here too he received humiliation. A bread was thrown towards him like he was an animal or a ghost.

And when Bakha reached his one-room mud house. He narrated whatever happened with him to his father. Although, his father gave him sympathy but he also told him that they were sweepers and will remain as such.

So, Bakha left the house to meet some of his friends. He told them everything. They gave him solace. And they decided to play a hockey match with the another team.

The hockey stick which was promised by the Havaldar Charat Singh to Bakha was given to him by the latter. But, while playing the match a son of an upper caste got injured. And the latter’s mother abused Bakha with full force.

And when he reached home his father also cursed him. In fact, he told Bakha to leave his house forever. So, he left without knowing his destination, he just ran and ran until he reached the railway station of his town.

Although, when he left his house he met an English man who was working for the Christian missionary. In fact, he tried to convert Bakha to Christianity but Bakha didn’t understand a word of that man so ran from that place too.

An Untouchable and the Mahatma

Mahatma Gandhi ke Jai ( Hail Gandhi), Gandhi Amar Rahe ( Long Live Gandhi) kinda slogans were raised in and around the railway station. Although, Bakha didn’t knew who was Mahatma Gandhi. But, he observed that people were talking good about him. So, he joined the place where Gandhi was about a give a speech.

When the first time Bakha heard those words from the mouth of the great Gandhi, it was like a surreal experience for him.

Gandhi said amongst the multitude –

I regard Untouchability as the greatest blot on Hinduism.

Gandhi further said, Two of the strongest desires that keep me in the flesh are the emancipation of the Untouchables and the protection of the cow.

Although, Bakha had a terrible day but after hearing Gandhi he somehow forgotten about his morning experience and he thought that he will narrate the words of Mahatma to his father. And he went back towards his house.

We are all humans

Although, too much of water has flown through the river Ganges, but the sin of Untouchability is still haunts India. The way a particular community of people has been treated in India shows us that when it comes to animals the human animal is the most cruel.

The Story of Bakha is a fictitious tale but it’s a realistic one. In fact, it shows us that we all are shackled ourselves with unnecessary notions of caste, creed, religion and ethnicity. We need to unshackle that as soon as possible. Because, we all are born as humans and will die as such.

Albeit, Untouchable by Mulk Raj Anand is a twentieth century classic but the language is little hard. Still, I recommend you to read this novel.

I’ll end with this bon mot –

None of us are pure, we shouldn’t be alive if we were.