Upcountry Tales: Once Upon A Time In The Heart Of India

Upcountry tales, Once upon a time in the heart of India is a collection of stories based on North India by Mark Tully.

Although, it’s a fictional book but each story in this book tells us about the reality of India i.e the notion of caste system, corrupt bureaucracy, dynastic politics, nepotism and vote bank politics etc. 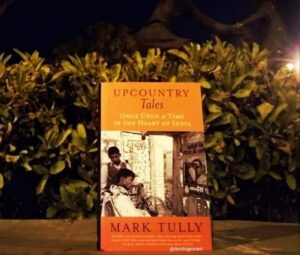 And these stories were of during the mid 1980s when Congress party was ruling India and majority of the Indian States. And the infamous License-Permit-Quota-Raj or neta-babu Raj was at its peak during that time. The same license raj which was abolished later in 1990s by P. V. Narasimha Rao.

Like how a dalit man fought against all the odds for a temple for his beloved Saint Ravi Das ( A popular figure amongst the Dalits of India ).

How a police personnel saved the life of an innocent person by finding the real culprit by withstanding all the political pressures.

How a woman fought with a politician to save a local train. Because the latter was disturbing the monopoly of this politician by carrying passengers from one town to another and this affected his local bus service.

Story of a jat boy who was bullied because of his short height and stature, and how his family wanted him to keep the family tradition alive by adopting farming. But a teacher in his school recognised his talent and encouraged him to aim high and focus only on studies. And later he got admission in New Delhi because of his good marks. There he met a girl and the latter was from a well educated family, and how they became good friends or more than friends. But in the end the relationship didn’t work out and both parted away. The boy went to his village so that he can help his community there, and the girl cleared the prestigious civil services exam and joined the Indian administrative services ( IAS ).

Story of a politician’s son, that how after the death of his father he came to India from London, so that he can inherit his father politics. Because in India politics is like a business. But in this process he failed badly and later he vanished from the political seen forever because he can’t handle all of this.

Although, these stories were of during the mid 1980s, but if you are a keen observer of Indian politics and society then you will find that miniscule has changed in the Indian system. The same problems which were mentioned in the stories are also prevalent today like the marginalization of Dalits by the society, the nepotism, dynastic politics, corrupt leaders and bureaucracy, and faulty education system.

The language of the book is easy to read, and i will recommend to readers that if you are a keen observer of the Indian society then you can surely go for this book.