When The Moon Is Low By Nadia Hashimi

When the moon is low but the spirit of her children and herself were never too low. A tale of a displaced Afghan family’s longing, suffering and resilience.

Nadia Hashimi’s novel is not just about an individual Afghan family. It speaks for the multitudes of Afghans who were (are) forced to leave their homeland into the journey of an unknown.

Afghanistan, A landlocked nation in South Asia. The people of this land has seen and suffered ( still suffering) too much. Be it the invasion of the Soviets in 1979, or the Afghan Jihad, Mujahidin rule, Civil war, the infamous rule of the Taliban and lastly the invasion of United States in 2001.

Afghans, their land, their lives, their resources all are traded at the expense of no one but Afghanistan. Time and again they were left to themselves. Still, each time people of this brave land manages to bounce back. That’s the spirit of Afghans which makes them resilient.

So, let’s see what Nadia Hashimi in her book, When the moon is low, tries to convey the message to the rest of the world.

What is When the moon is low?

When the moon is low is a novel written by Nadia Hashimi. It’s a story of an Afghan woman by the name of Fereiba and her family. 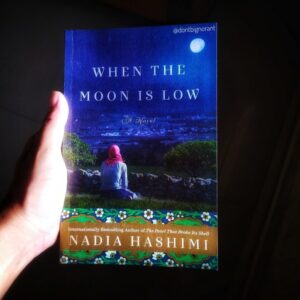 When the moon is low, Nadia Hashimi

Its a tale which in the words of Mahatma Gandhi can shake the world in a gentle way.

A child without a mother –

Fereiba was born the day her mother passed away. Fereiba’s mother died while giving birth to her. Its an unimaginable situation not only for that child but also for the father and the rest of the family.

Although, Fereiba’s paternal grandfather arranged a second marriage for her father. But, it didn’t change anything for that innocent girl child.

Although, her stepmother raised her but she kept her at an arms length. She never received the love and care of a mother which every child in this world deserves no matter wherever he or she is.

But, Fereiba managed to create a world of her own. It’s her father’s orchard. A place where she used to be whenever she felt alone. Its a place where she met an angel who said this to her,

Fereiba jan. In the darkness, when you cannot see the ground under your feet and when your fingers touch nothing but night, you are not alone. I will stay with you as moonlight stays on water.

For a child who seldom receives love and care. The words like these give them a sense of hope. It’s like a tonic which will recharge them whenever they feel low. The same fereiba felt at that time.

As Fereiba created a space for herself in her father’s orchard. It was here she met a boy with whom she used to talk but clandestinely. A wall separated them from each other.

He was her neighbour. His name was Hameed. She felt good whenever they talk. It’s like a stress reliever for her.

Although, Fereiba’s stepmother arranged a marriage for her but somehow that boy died. And fereiba already started loving Hameed. And the latter conveyed the same to her.

So, one day, Hameed’s mother came to fereiba’s house. The latter thought that she came to ask her hand for marriage with Hameed. But, it came as a shock to her that instead of her, Hameed’s mother asked for Najiba’s (Fereiba’s step sister) hand for her son.

Fereiba felt terrible. She felt that Hameed fooled her. She didn’t want to see his face again. Although, Hameed and Najiba were happily married but Hameed’s aunt saw Fereiba and liked her. In fact, She asked for Fereiba’s hand for her only son, Mahmood.

Fereiba married to Mahmood Waziri. The ingenious Engineer who worked for the Ministry of Water and Electricity.

Initially, Fereiba was skeptical about the Waziri family. But, it’s like a blessing in disguise for her. Not only her mother-in-law and Mahmood gave utmost love and respect to her. In fact, they also supported her to teach and work as a teacher.

The void which exists in Fereiba’s life since her childhood was filled with the love of Mahmood. But, she didn’t knew that life can change within few minutes.

The era of 1990s was the time of uncertainty in Afghanistan. Instead of the rain drops rockets were raining from the skyline. The same rocket which killed the family of Laila, A famous character in A Thousand Splendid Suns of Khaled Hosseini. Although, Fereiba’s sisters and extended family already left Afghanistan for good but Mahmood decided to stay.

Mahmood and Fereiba already became mother and father of two beautiful Children, Saleem and Samira, and the third one she was already nurturing in her womb.

One day out of the blue, few members of the Taliban came and took Mahmood with them. Fereiba and her children saw Mahmood pleading with those mercenaries that he’s innocent and he did nothing wrong. But to no avail.

As Fereiba was already pregnant with her third child. And there was no one to look after her family. It was a terrible situation for a woman. She was clueless at that time.

But, few days later she received the news. A news that shattered her soul to the core. Her beloved husband, Mahmood was killed by the Taliban.

Journey to an unknown –

Although, before his killing, Mahmood had already decided that he will take his family to London, England. But, that responsibility came onto the shoulders of Fereiba and to an extent her Son, Saleem.

So, the family of four, Fereiba, Saleem, Samira and Aziz, the newly born child, decided to leave Afghanistan for good. They had the fake passports and money to reach their destination. But, it was not that easy especially when you are living in Afghanistan.

With the help of a family, Fereiba and her children managed to reach Iran. And from Iran they were taken to Turkey by the smugglers.

In Turkey, they lived with a family in a nondescript village. It was in this village where to support his family, Saleem started working as a labourer in a farm. He worked hard so that his family won’t starved to death. Like his mother he also experienced a neglected childhood.

Saleem used to think whenever he saw boys and girls of his age that he would have been in school if his father was alive. Things would have been better and different. The smile from his face had gone forever.

Although, they were living in Turkey but they knew that their destination was London. So, Fereiba decided to move on. They thanked the Turkish family which hosted them. And they reached to Athens, Greece.

It was in Greece that Saleem would see the face of his mother and siblings for the last time. As, they reached Athens but money was limited. So, his mother gave him her gold bangles to sell.

Although, Saleem was able to sold off the bangles but he was caught by the Greece police and beaten and sent to Turkey again because he was an illegal immigrant.

As he had no where to go in Turkey. So, he went to the same family who hosted them. From there he contacted his mother and told her that she should leave Greece and go to London immediately.

Fereiba had no choice but to leave. With a heavy heart she left Athens and managed to reach London with her two children and she asked for the asylum there.

Although, day and night she hoped that one day she will see her son again. And they will be reunited again.The same Saleem thought and somehow he managed to reach France. And in the hope that he will be with her beloved mother sooner than later.

People with no identity –

When people leave their country it’s mainly because of two reasons, Push factor or the Pull factor.

Push factor works when there is no work opportunities, instability and chaos.

Pull factor works when someone sees a better opportunity in another country. Be it for work, education or business etc.

Fereiba’s family and many more like them left and still leaving Afghanistan because of the Push factor. Although, it’s a fictional character but uncountable number of women like Fereiba exists not only in Afghanistan but in different parts of the World.

These people are termed as immigrants. Those who came with fake documents are called as illegal immigrants. Neither they can return to their homeland nor they can live the life of dignity in their host nation. They live their lives without an identity.

Those people who are without an identity are prone to get exploited. Be it prostitution, illegal human organ trafficking, terrorism and other contraband things. It’s a vicious cycle for them.

In fact, it’s the collective responsibility of the world to make sure that at least we can give them a sense of hope. So that they can live their lives with utmost respect and dignity.