Without Fear : The Life and Trial Of Bhagat Singh

Without fear the life and trial of Bhagat Singh by Kuldip Nayar is must-read book for those who love and admire the courage of Sardar Bhagat Singh.

Who was Bhagat Singh?

Bhagat Singh was an Indian revolutionary and a freedom fighter who gave his life for the freedom of his beloved motherland when he was only 23-years-old. 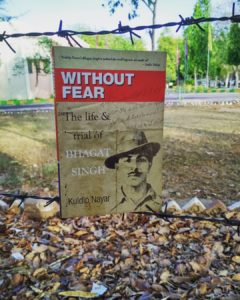 The epitome of Bravery, Bhagat Singh.

Though he was a Sikh but his grandfather Sardar Arjun Singh was a staunch Arya Samajist.

From a very young age Bhagat Singh was attracted towards the Indian Freedom Movement and he was greatly influenced by his uncle Ajit Singh.

When he was only 12 years old he visited the Jallianwala Bagh in April 1919, after the massacre of people there by ‘General Dyer’ and brought ‘Blood soaked sand’.

And later when Udham Singh killed general dyer, he was influenced by the fearlessness of Bhagat Singh.

Most of us view Bhagat Singh as a brave young patriot who died for his motherland.

But other than this he was a giant of an intellectual who read books voraciously.

In fact, his friends called him a ‘moving library’.

And before being executed he was reading a book by the name of ‘Revolutionary Lenin’.

As he devoted his life to free Hindustan from the yoke of British colonialism, he went to kanpur where he worked as a newspaper vendor. 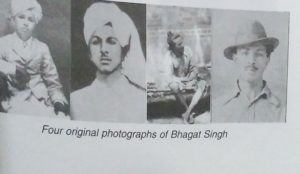 Later in kanpur he also worked for ‘Pratap’, the Hindi paper edited by Ganesh Shankar Vidhyarthi, despite being from a well to do family.

This shows us that how humble person he was.

But, later he was released on bail by the British authorities.

Before joining the HSRA (Hindustan Socialist Republic Association), he created Bharat naujawan sabha (national youth organization), and the latter was created on the pattern of ‘Young Italy’, which was inspired by Garibaldi and Mazzini,  national heroes of Italy.

When Lala Lajpat Rai was beaten to death by deputy superintendent of police Saunders. Singh and his comrades decided to teach British authorities a good lesson.

And in Lahore they killed saunders by pumping bullets in his body and they escaped from there swiftly.

By killing saunders, HSRA and Bhagat Singh came into spotlight of the national political scene.

Though after killing saunders he and his comrades remained underground for sometime and later to tell the British that they were not going anywhere.

He and Batukeshwar Dutt threw harmless bombs in the central assembly (present lower house of Indian parliament) to make ‘the deaf hear’.

After that incident both were arrested by the police and later brought to court to persecute them.

But, Bhagat Singh and his comrades used the British courts to propagate their ideology and their vision for the free hindustan.

And they exposed the hypocrisy of the British judicial system.

In the courts they shouted slogans like Inquilab zindabad (long live the revolution) and Down with imperialism (samrajyavad murdabad).

When Bhagat and his comrades demanded that they should be treated as ‘political prisoners’ rather than petty criminals.

But the British authorities refused and in protest they started the hunger strike.

In that ‘Hunger Strike’ Bhagat Singh lost one of his dear friend ‘Jatin Das’ who died after remained unfed for 63 days.

Author also discussed about the role of Mahatma Gandhi when he met Lord Irwin to plea for mercy for Bhagat Singh and his comrades but failed badly.

In fact, lord Irwin was determined to kill Singh as soon as possible.

Because they knew that they can fight with hundreds of Mahatma Gandhi but not with one Bhagat Singh.

And they did by executing Bhagat Singh, Rajguru and Sukhdev on 23 march 1931 in Lahore central jail on the charges of ‘Second Lahore Conspiracy Case’.

Though they had killed Bhagat Singh but not his ideas.

Other than his bravery to fight against the British colonists, he popularized the slogan of ‘Inquilab zindabad’, and this slogan is used not only in India but all of South Asia.

Bhagat Singh also fought against caste and communalism, and he said that it’s better for Hindustan to separate politics from religion.

And one important incident tell us that how he treated every human as equal.

Before being executed he told “Bhoga”, a man who cleaned toilets in the lahore central jail, to cook food for him.

Though, Bhoga was initially hesitated, but later he cooked food for Singh and the latter ate it like a kid.

Although, Sardar Bhagat Singh is not present with us physically but his ideas, his deeds will always remain with us in letter and spirit.

He was only twenty-three years old when he sacrificed his life for the freedom of his motherland. 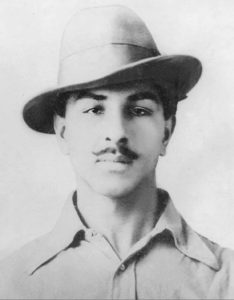 People like him should be the ideal role model for the ‘Youth of India’.

That’s why reading about his life and times is necessary for the people of Hindustan.

I will recommend to readers that this book is a must read.

And after reading this book also try to read a book by the name of “Understanding Bhagat Singh”, by chaman lal.

I will conclude with these immortal lines of Bismil Azimabadi –

(The desire to make a Sacrifice is in our hearts,
Let us see what strength there is in the arms of our executioner.)