Women at war : The Rani of Jhansi Regiment (RJR)

I want a unit of brave Indian women to form a “Death-Defying Regiment” who will wield the sword which the brave Rani of Jhansi wielded in India’s First war of Independence’. 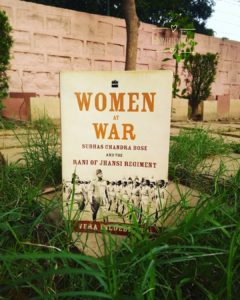 The Rani of Jhansi Regiment, The revolutionary idea of Netaji Subhash Chandra Bose.

Women at war, Subhash Chandra Bose and the Rani of Jhansi Regiment, was thoroughly researched and a beautifully written book on a subject which in India very few people are aware of.

It’s a story of a man and his revolutionary idea which led to the creation of the Rani of Jhansi Regiment (RGR).

What was the Rani of Jhansi Regiment?

The Rani of Jhansi Regiment (RGR), the first all-female infantry fighting unit in the Military history, was created in Singapore in 1943 by Netaji Subhash Bose.

This book also tells us about those Brave Daughters of mother India, who left their friends and families, to fight for a country which they had never seen in their life.

These women were born and brought up in the Indian diaspora community of Malaysia, Burma (now Myanmar), and Singapore.

In this 21st century era when women all over the world are fighting for their rights, especially for the equality of the opportunities in every field, be it sports, politics or economics.

Around 75 years ago a man by the name of Subhash Chandra Bose created the ‘First all-female infantry’ fighting unit in the military history.

A very radical thought even at that time.

He talked about equality for both men and women.

He dreamt of an independent India where both women and men will work together for the development of his beloved country.

He was a man who was way ahead of his time.

Albeit, he died in 1945 in an airplane crash, but his ideas are still alive and relevant.

Who was Subhash Chandra Bose?

Subhash chandra bose was an Indian Freedom Fighter who unlike mahatma gandhi, believed in the ‘Principle of Force’.

And also on the concept of ‘The enemy’s enemy is my friend’.

That’s why in the world war second he supported the Axis Powers instead of the Allies.

Although, there is one similarity between Mahatma Gandhi and Netaji Subhash Chandra Bose.

Both leaders encouraged the women of India to participate and contribute in the Indian Freedom Movement.

As Netaji died in 1945, so we can’t predict accurately that why he created the Rani of Jhansi Regiment (RJR)

Although, there are several theories on the creation of RJR which is discussed by the author very well in this book.

Although, the Ranis who were part of the RJR never fought against the enemy, never fired a single bullet on the front line.

But, ‘It’s the effort that counts’, rather than the end result.

And those brave young women who left their homes for the sake of their motherland are the real heroines of Hindustan.

The language of the book is easy to be read.

And I strongly recommend to the Indian Readers, especially to the ‘Women of Hindustan’ to read this book.