Dastan-e-ghadar, The tale of the mutiny is beautifully narrated and elegantly translated memoir of Zahir Dehlvi. The latter was an official in the court of the last Mughal Emperor, Bahadur Shah Zafar second.

Zahir dehlvi tells us about the revolt of 1857, or the first war of the Indian independence, and what happened with his life after the suppression of that mutiny by the British East India Company. 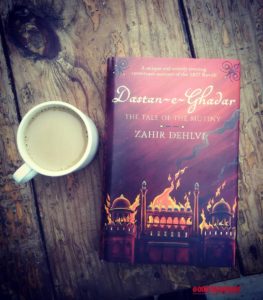 The mutiny of 1857 was one of the most important events in the annals of Indian history. The outcomes of 1857 opened the Pandora’s box in front of the British East India Company and which led to the end of the latter’s rule and the land of Hindustan came directly under the control of the British crown.

Who was Zahir Dehlvi?

“Zahir dehlvi”, was an accomplished poet and an official in the court of mughal emperor, Bahadur Shah Zafar. He was twenty-two years old when the mutiny started by the sepoys in the name of the Mughal emperor. The experiences which he shared with us is quite revealing.

He didn’t express any kind of sympathy towards the sepoys who started the revolt of 1857. In fact, his pro-British leanings can be gauged while reading his memoir.

Who was Bahadur Shah Zafar?

Bahadur Shah Zafar, was the last Mughal emperor of India. The sepoys started the revolt in his name. After the suppression of mutiny he was trialed and forced to live in exile in Rangoon, along with his family members. He died there.

There were several reasons due to which the revolt of 1857 started, some of the most important causes are as follows,

Racial discrimination, Interference in religion, and the introduction of greased cartridges, which was believed to be made of cow and pig fat.

This book needs to read by those who loves reading about history. Though, in between the content of the book becomes little bit boring. Still, it’s better to read something good rather than doing nothing.

I will end with these lines of George Santayana :-

‘The wisest mind has something yet to learn’.